– Minister Parag said programme is an investment to realise dreams

On Friday, 83 prospective scholars from Region Ten submitted their applications to pursue studies through the Government’s 20,000 online scholarship programme.

The scholarships are organised jointly by the Ministries of Education and Public Service, offering 85 programmes through the Guyana Online Academy of Learning (GOAL).

During the launch of the programme in Kwakwani, 30 persons submitted applications, while 53 submitted theirs during a similar exercise held at the Watooka Guest House.

In an invited comment, Mr. Orlando Johashen told DPI, “it’s a need and I think that young people should get on board… It’s an opportunity where we as Guyanese can maximise to do something that’s better for ourselves in terms of academics.”

An ecstatic Ms. Gleneshia Clincan, who has interests in the business GOAL programmes, also praised the initiative. “I think it is a very, very good initiative that the Government came up with and I am glad that I am one of the persons that will be on board, hoping that I would be granted the scholarship,” she said.

Ms. Clincan added that that she intends to pass on the knowledge she gains through a scholarship to others.

Another resident, Mr. Royan Norton, described the programme as, “an opportunity to go and develop myself.”

Mr. Norton who intends to pursue a finance and analysis Bachelor’s Degree through GOAL also said, “for young people at this age, I would say, they would gain much from this scholarship.”

Meanwhile, in her feature address in Kwakwani, Public Service Minister, Hon. Sonia Parag said the programme is not a gimmick, but a well-planned initiative created by President Dr. Mohamed Irfaan Ali prior to the 2020 elections.

“This was a consultative process and a discussion led with youths, with many members in different communities all across Guyana… The President knew at that time that there were gaps to be filled.

He knew what we wanted to see was Guyanese be proud of themselves and be able to achieve or attains a tertiary education that was otherwise impossible,” she said.

Minister Parag urged the youth to take advantage of the scholarships. She noted that while the Bachelor’s Degree programmes cater to applicants who possess Caribbean Secondary Education Certificate and Caribbean Advanced Proficiency Examinations certificates, the Bachelor Preparatory Programme is available for those without those qualifications.

“This reaches a category of our population that has always been left out in terms of education,” she added.

Minister Parag said that upon successful completion of the preparatory programme, those individuals can then apply for scholarships in diploma or Bachelor’s programmes.

“Once we have an educated population, we can graduate from poverty and we can move up among the ranks of developed countries.”

The Minister maintained that GOAL would allow Guyanese the ability to, “manage, invest and create wealth for the prosperity of Guyana.”

Other representatives from the Education and Public Service Ministers, and senior members of the Regional Democratic Council of Region 10 also attended the exercise.

GOAL is managed by the Education Ministry and the scholarships will be awarded through the Ministry of Public Service.

The Government intends to award at minimum 4,500 scholarships per year through GOAL.

“We are here to serve every Guyanese” -Manickchand 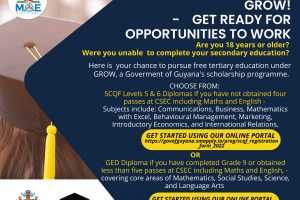 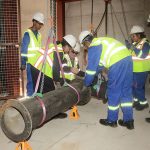